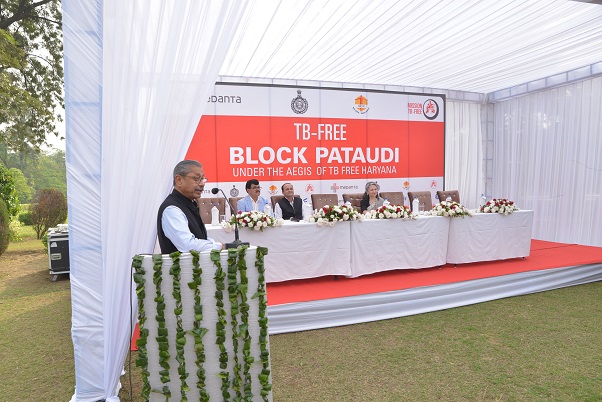 In continuation of its commitment to make India TB free, Mission TB free Haryana, a flagship initiative of Medanta, in collaboration with the International Union Against Tuberculosis and Lung Disease (The Union), Central TB Division of the Ministry of Health & Family Welfare, Government of India and the Government of Haryana has launched ‘’TB Free Block Pataudi’’ to improve the diagnosis and treatment of tuberculosis in the district.

‘TB Free Block Pataudi’ aims to screen a population of 6 lakh across 142 villages in the Pataudi block over the next 2 years. Volunteers from Medanta along with ASHAs, the grassroots health workers in villages will conduct door-to-door screenings for detecting people who are at potential risk. The ones who screen positive for cough will be invited to attend a camp with X-ray, sputum and geneXpert facilities available at point of care in a mobile van. The diagnosis will be confirmed on the same day and the results will be available on a unique mobile application which has been developed in-house by Medanta.

Dr Naresh Trehan, Chairman & Managing Director, Medanta said, “Every year, India witnesses over 8,50,000 cases of TB that go undiagnosed and untreated and it is a serious challenge that has been plaguing the nation. Screening and detection play a crucial role in the prevention and management of the disease as currently a vast majority of patients go undetected in India, thereby increasing the disease burden significantly. The private sector can play an important role in the prevention and treatment of TB by taking on a larger role in the eradication of the disease’’. ‘TB Free Block Pataudi’ is a collaborative effort and a step forward to making Haryana TB free.

Internationally acclaimed respiratory disease expert, Dr Bornali Datta, Director, Pulmonary Medicine, Respiratory & Sleep Medicine, Medanta said, ‘’ As part of our commitment to making India TB free, we have screened 25,000 patients through Mission TB-free Haryana over the last six years. Mission TB Free Block Pataudi has a twofold goal - to eradicate TB from the block over the next two years and to develop a cost-effective model that can be scaled country-wide. Since TB patients can remain apparently healthy for several months, it leads to delay in diagnosis.  People usually do not visit a doctor until they are significantly unwell. Therefore, there must be enough awareness in the people as most of the TB cases can be cured when the disease is diagnosed early, and appropriate medicines provided’’.