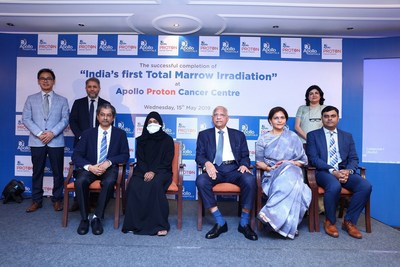 In a first-ever milestone in cancer treatment in India, the Apollo Proton Cancer Center (APCC) in Chennai has successfully performed Total Marrow Irradiation (TMI) as a conditioning protocol prior to Bone Marrow Transplant.

Dr. Preetha Reddy, Vice Chairperson, Apollo Hospitals Group said, "The Apollo Proton Cancer Centre has opened new frontiers in cancer care and it is a proud moment today, just a few months after the launch, to see the APCC achieve this significant landmark for the first time in the country. This achievement validates our investment in the APCC in bringing this best and latest medical technology to India. We are sure that the future will see the APCC achieve many more milestones and take the battle against cancer forward not just for patients in India but also from South East Asia."

A 35-year-old nurse from Oman underwent the procedure at South East Asia's first Proton Therapy Center. She was diagnosed with Chronic Myeloid Leukemia (CML) with mixed phenotypic acute leukemia. After the diagnosis, she was referred to Apollo Hospitals for Bone Marrow Transplant. The doctors at Apollo decided to proceed with Total Marrow Irradiation based conditioning for the transplant.