Lung cancer today accounts for higher number of deaths in the country than colorectal cancer, prostate cancer and breast cancer. 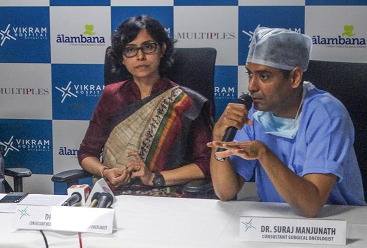 Data from Indian Council of Medical Research (ICMR) suggests that lung cancer is fast turning into an epidemic in India. It is a high-mortality cancer due to late stage at diagnosis and poor access to affordable healthcare, and today accounts for higher number of deaths in the country than colorectal cancer, prostate cancer and breast cancer. This was stated recently by oncologists from Vikram Hospital, Bengaluru, who were speaking at a workshop to create awareness about lung cancer in Bengaluru. Worldwide, November is observed as the lung cancer awareness month.

Said Dr. Niti Raizada, Sr. Consultant Medical Oncologist and Hemato-oncologist, Vikram Hospital, Bengaluru: “Only 15 percent of cases of lung cancer are curable at the time of diagnosis. Patients with lung cancer present themselves for diagnosis at a much later stage than other cancers due to the nature of the disease. Early on, people with lung cancer have no symptoms or vague symptoms. In fact, if lung cancer is detected by chest X-ray, it is already too late for the patient. The only effective method for screening lung cancer in early stages is the Low Dose Helical Lung CT, where high-resolution images pick up early lung lesions.”

Said Dr. Suraj Manjunath, Consultant Onco-surgeon, Vikram Hospital, Bengaluru: “Lung cancer has one of the highest morbidity and mortality among all cancers. It accounts for 14.5% of all cancers in men and 8.4% in women globally. It is a leading cause of cancer death in men worldwide at 22%, which means that one in five of all cancer deaths in men occur due to lung cancer. Lung cancer accounts for 5.9% of all new cancer cases diagnosed in India (both sex combined), while mortality is 8.82% of all cancers combined.”

“Smoking is the single largest contributor for lung cancer. Passive smoking, exposure to carcinogenic toxins like asbestos and radon, radiation and air pollutants are other causes, besides a small percentage of genetic cancer. Exposure of women to smoke from the burning of charcoal for cooking is also a cause of lung cancer. Physical activity may reduce the risk of lung cancer by about 20 percent. Exercise is known to improve lung function and reduce the danger of other diseases too. In the West, there is a small decrease in the number of smokers. However, such trend is not seen in India yet. Moreover, the country is seeing an emerging population of women smokers. The most common age group for lung cancer is 50-59 years,” Dr. Niti Raizada said.

On occasion of Lung Cancer Awareness Month in November, Vikram Hospital Bengaluru is running a lung cancer screening program for chronic smokers, including assessment by paramedical workers and, if required, a low-dose CT scan of the chest. The hospital also offers smoking cessation therapy through a dedicated clinic run by the department of medical oncology to help smokers quit smoking.