Quintiles among Fortune 500 list of most admired companies in 2015

Quintiles among Fortune 500 list of most admired companies in 2015 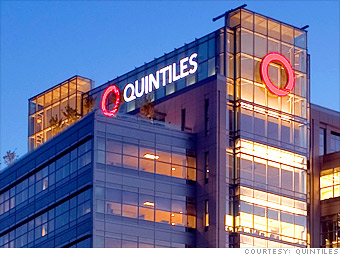 Qunitles entered its 33rd year of operation, having been established at the University of North Carolina at Chapel Hill in 1982

Quintiles, the world's largest biopharmaceutical services company, has been named to FORTUNE magazine's "World's Most Admired Quintiles is ranked third overall in FORTUNE's Healthcare: Pharmacy and Other Services category with the top ranking for the reputation attribute of "global competitiveness" and second within the segment

"I would like to congratulate Quintiles' employees around the world for making this possible," said Quintiles Chief Executive Officer Tom Pike. "Being named one of the World's Most Admired Companies

"It is recognition that Quintiles is headed in the right direction to deliver value for customers as we improve their probability of success," Pike continued. "It is now up to all of us in the organization to live upto these expectations."

Quintiles recently entered its 33rd year of operation, having been established at the University of North Carolina at Chapel Hill in 1982 by biostatistics professors Dr Dennis Gillings, CBE and Gary Koch, PhD. The company, which once operated out of a trailer on the UNC campus, now conducts business in approximately 100 countries.

More than three decades later, Quintiles is the world's largest provider of biopharmaceutical development and commercial outsourcing services as the company helped develop or commercialize all of 2013's top-100 best-selling drugs on the market (2014 statistics pending).

During 2014, Quintiles was recognized as the "Best Contract Research Organization" (CRO) in the UK SCRIP awards, named "Asia CRO of the Year" by Frost and Sullivan, voted "Best CRO in Asia" in the BioPharma Asia Industry Awards and was named "Best Contract Sales Organization (CSO)" in the PharmaField awards as well as being named to the Fortune 500 for the first time.