BioSpectrum announces hits and misses of 2013: A Flash Back

BioSpectrum announces hits and misses of 2013: A Flash Back 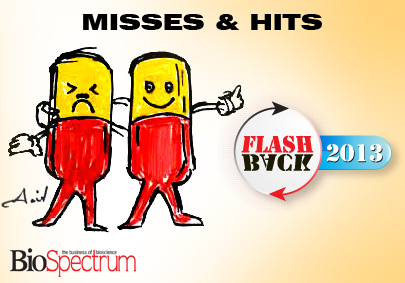 The Indian BioScience industry witnessed tremendous highs and lows in 2013. Specifically, the pharmaceutical industry took most of the beating, owing to regulatory woes within the country and import bans from foreign bodies.

However, in terms of new innovation and products developed, India made many heads turn in the global market towards itself. Major collaboration and acquisitions were a continuous integral part of many Indian companies.

Here is an exclusive sneek-peek of the significant events in 2013:

Being set up at the cost of Rs 2,035 crore, the National Cancer Institute (NCI) is expected to cater to requirements in northern India. This is a landmark step in the arena of cancer research in the country and shall lessen the deficit of tertiary cancer care in the Northern region. Cancer is emerging as a major public health concern in India, where every year 11 lakhs new cases are diagnosed, with a mortality rate of 5.5 lakhs per year.

Shackled in India, Bt Brinjal gets free run in Bangladesh

While the Bt brinjal issue in India continues to remain tangled in the political and legal systems, Bangladeshis have decided to take the plunge. It may sound positive for the industry, activists feel otherwise. The top regulatory authority in Bangladesh, the National Committee on Biosafety (NCB), has given its approval in November, 2013, to the commercial cultivation of the Bt brinjal, making it the country first in South Asia to allow the entry of any edible genetically modified (GM) crop in its market.

With the introduction and implementation of remote access informationdevices that are accessible and has the ability of interoperatibility from any remote place and transmit data at any given time will result in saving lives in case of emergency situation. Prisma Global limited introduces a product called Medibox or MDS3.

GE Healthcare announced its plans to invest $2 billion over the next five years to accelerate the development of innovative software for healthcare systems and applications. Over next five years, the company will focus on advancing current and future technology offerings through the convergence of machine and intelligent data known as the industrial internet.

It is the age of 'Digital Patient', says Quintiles

A new report by Quintiles has indicated that sponsor companies that can successfully engage with the digital patient will distinguish themselves and increase their probability of success. Quintiles has suggested that aligning activities such as patient recruitment, collection of medical data with the digital environment will streamline product development, prove product value and accelerate product adoption.

UK partners with BioAsia to bolster ties in biotechnology

On November 29, 2013, the United Kingdom partnered with BioAsia as the Principal Country Partner for the 11th edition of the event, BioAsia 2014, to be held in Hyderabad from February 17-19, 2014, at the Hyderabad International Convention Centre.

On October 9, 2013, Novozymes and Beta Renewables officially opened the world's largest, second-generation biofuels facility in Crescentino, Northern Italy, estimated to produce 75 million liters of cellulosic ethanol annually, from agricultural waste. Beta Renewables is a leader in producing cellulosic biofuels and a part of the Mossi Ghisolfi Group, and Novozymes.

In light of the controversy regarding the quality of generic drugs produced in India, the government has issued a statement that supports the industry whose majority exports are to regulated markets and is 4th in the world in terms of production. The Government of India has come forth with an assurance about the drugs being manufactured in India being subject to scrutiny by various agencies.

Last year, during USFDA's visit to Ranbaxy's Laboratory facility, inspectors found a black 'hair' particle in a tablet, possibly suspected to have fallen from an employee's arms. Post this incident, the USFDA became highly alert and imposed an import alert on its Mohali plant, stating that the drugmakers manufacturing units were not up to the industrial standards.

The Indian pharmaceutical industry has received US $1 billion as FDI (Foreign Direct Investment) - the highest among top 10 segments, during April-June this year. Back in April-June 2012, the Foreign Direct Investment (FDI) in the drugs and pharmaceutical industry was at $465 million, according to the latest data of Department of Industrial Policy and Promotion (DIPP)

Sanofi-Aventis' fully owned subsidiary - Genzyme Corporation, has filed a suit against Dr Reddy's Laboratories, alleging that it has infringed on patents of its cancer drug Mozobil (Plerixafor injection) on three counts.

South Asia's first second generation cellulosic ethanol demo plant by Praj Industries, will enable development of the entire value chain including biomass impact on the captital as well as operational. The demo plant will enable Praj to consolidate its 6 years of R&D efforts, starting with laboratory trials to pilot scale trials. The same plant will also enable Praj to develop various biochemicals and bioproducts.

On October 25, 2013, Biocon Ltd, announced that it has been ranked at 6th position by Science Magazine, on the annual global 'top twenty employers' list in the biopharma sector. This is a major leap for the company from its 19th place in 2012.

In an important development, MSD, one of the world's starring players in 23-valent Pneumococcal Polysaccharide Vaccines category, and Pharma leading Lupin Limited (Lupin) today announced the forming of an India-specific strategic partnership. A recent survey from India showed that the case fatality rate due to invasive pneumococcal disease observed in elderly is 26.4% which is much higher than that in children and highlights the demand for preventive interventions in adults.

Cipla has announced an offer to the shareholders of Cipla Medpro South Africa to acquire 100% of the ordinary share capital of Medpro for $1.13 per share. The offer will be implemented via a scheme of arrangement and is subject to regulatory and other approvals including approval by Medpro shareholders. The total consideration payable by Cipla is approximately USD 512 million.

Said to be much effective and safe over attenuated vaccines against Japanese encephalitis disease, Bharat Biotech's JENVAC has proved its long term protection ability during clinical studies. The vaccine was launched at New Delhi on October 04, 2013. The biggest advantage of JENVAC over live attenuated vaccines is that this vaccine could be administered even during an epidemic as it is an extremely purified and inactivated vaccine.

India's first ever biopiracy case has been filed in Karnataka against Monsanto by ESG (Environment Support Group), a non-profit organization involved in environmental and social justice, for infringing the country's Biological Diversity Act. It is alleged that endemic varieties of Brinjal were accessed by UAS (University of Agricultural Sciences), Monsanto and Mahyco. After which, Monsanto's proprietary Bt Gene were inserted in the local varieties of Brinjal to create the Genetically Modified Bt Brinjal.

While India is free from Yellow fever disease, the citizens traveling to affected countries have to be immunized. In view of the interruption of regular supply from CRI, K and anticipating the crisis situation, Sanofi Pasteur (the only company which has DCGI approval, but for single dose vaccine vial) was approached for supply of 60,000 doses (10 dose vial) in April, 2013. It was mentioned that, Sanofi Pasteur does not have license for multi-dose vial, it will have to get DCGI approval for Govt of India supply order.