VC funding in healthcare IT to exceed $2 billion in 2013

VC funding in Healthcare IT to exceed $2 billion in 2013 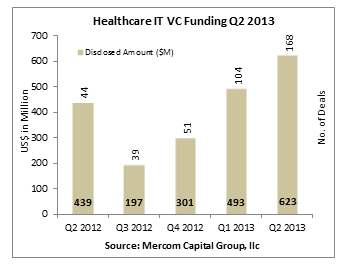 Mercom Capital Group, llc, a global communications and consulting firm, recently released its report on funding and mergers and acquisitions (M&A) activity in the Healthcare IT sector for the second quarter of 2013.

According to the report, venture capital (VC) funding in the sector continued its rapid growth in another record quarter with $623 million raised. There were 168 funding deals this quarter compared to 104 the previous quarter and 163 in all of 2012.

"VC funding in Healthcare IT is now on pace to exceed $2 billion in 2013," commented Raj Prabhu, CEO of Mercom Capital Group. "What government financial incentives did to spur EHR adoption and practice-focused technologies, "open data" is doing for consumer-focused companies that turn data into usable applications and services."

The impact of healthcare data on innovation, products and private investments is evidenced in Mercom's Q2 2013 report. The marked shift of VC money going from practice-focused technologies towards consumer-focused technologies in Q1 has picked up pace this quarter with consumer-focused companies receiving twice the amount of funding ($416 million in 112 deals) compared to practice-focused companies ($207 million in 56 deals).

Proteus Digital Health, a digital health feedback system provider, raised $45 million to make it the largest recipient of funding. lifeIMAGE, a network for securely sharing medical images and related health information, raised the second highest amount in the second quarter when it closed a $35.6 million Series C round. Blue Health Intelligence, a healthcare data and analytics company, raised $35.5 million. WorldOne brought in $35 million and Watermark Medical, closed out the Top 5 with $32.2 million.

The two disclosed M&A transactions in Q2 2013, included Jawbone, expanding its long line of recognizable wearable devices, which acquired BodyMedia, a maker of wearable health tracking devices, for more than $100 million. The other was Instem, a provider of IT applications to the early development healthcare market, which acquired Logos Holdings, a provider of full-service electronic data capture for clinical research organizations, along with its subsidiaries Logos EDC Solutions and Logos Technologies, for $7.7 million.

Consumer-focused companies specializing in apps, wearable devices, sensors, remote monitoring, patient engagement, rating/shopping, and social health networks for physician-to-physician, physician-to-patient and patient-to-patient were all prominent this quarter, whereas medical imaging, data analytics and EHR/EMR companies were among the practice-focused technologies that received attention this quarter.