Universal Robots has been the front-runner of collaborative robotics since the company was founded in 2005. Industry reports state that the UR5 does in 4 hours, what it would take manual labour 2-3 days to accomplish. The UR3, the UR5 and the UR10 – each named after their payload capacity in kilograms – led the way for affordable automation in India, with the launch of the e-Series further boosting India’s automation ambition. 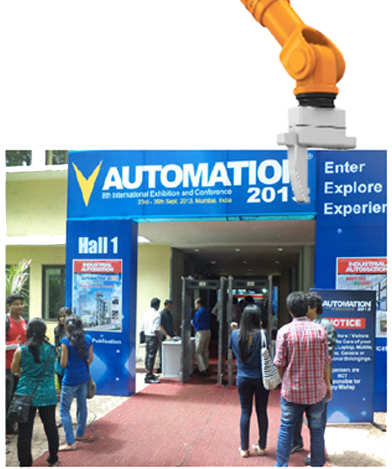 Universal Robots showcased their products in the 13th Edition of Automation Expo through their channel partners AlStrut India Pvt. Ltd. and Logicon Technosolutions Pvt. Ltd. The Expo was held at the Bombay Convention and Exhibition Centre, Goregaon from 29th August to 1st September 2018.

Universal Robots, the leading manufacturers of advanced user-friendly and light industrial robotic arms from Denmark showcased their latest technological advancement of collaborative robots or ‘Cobots’. Cobots was brought out in the international market with a unique intention of human – robot collaboration (HRC) which is in line with Industry 4.0. They have a wide market in the USA, Europe and South Asia, with having deployed 25,000 cobots globally.

The UR3 table-top robot is the perfect choice for light assembly tasks and jobs that call for absolute precision.  With 360-degree rotation on all wrist joints and infinite rotation on the end joint, the UR3 is the most flexible, versatile and collaborative robots on the market today. The slightly bigger UR5 is ideal for automating low-weight processing tasks like picking, placing and testing. The medium-sized robot arm offers one of the fastest payback times in the industry. The UR10, being the largest robot arm in the UR family will automate heavier weight process tasks with payload requirements of up to 10 kg. With a reach radius of 1300 mm the UR10 robot arm is especially suitable for packaging, palletizing, assembly and pick and place where the distance between different operating areas is longer.

In their efforts to take human – robot collaboration (HRC) to the next level, 2018 also saw the launch of e-Series range of cobots with increased sensitivity, force/torque sensors, easier programming and even faster installation. Based on the previous models, the e-Series comes in UR3e, UR5e and UR10e.

Mr. Pradeep David, General Manager, Universal Robots, South Asia said, “The collaborative robot market is a growing one and we are working towards creating an ecosystem of developers for providing various innovative applications to consumers. We believe in a ‘shared value business model’, as the cobot provides a platform, which helps in automating virtually any process. Our robotic arms have an average payback time of anywhere from 1 - 2 years in Indian conditions, which makes them the most favourable in the market, within the reach of businesses of all sizes from MSMEs and SMEs to MNCs. We have also seen that the perception about the affordability of cobots has started changing. Indian MSMEs and SMEs are now taking a keen interest in automating their production processes and have deployed cobots for the same. We are proud to be represented through our Channel Partners at one of India’s largest trade shows in Automation.”

Universal Robots has been the frontrunner of collaborative robotics since the company was founded in 2005. Industry reports state that the UR5 does in 4 hours, what it would take manual labour 2-3 days to accomplish. The UR3, the UR5 and the UR10 – each named after their payload capacity in kilograms – led the way for affordable automation in India, with the launch of the e-Series further boosting India’s automation ambition.