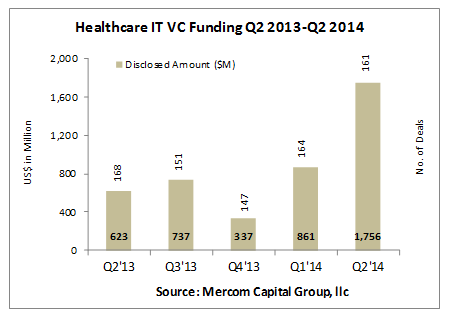 Mercom Capital Group, llc, a global communications and consulting firm, has released its report on funding and mergers and acquisitions (M&A) activity in the Healthcare Information Technology (IT) sector for the second quarter of 2014. Mercom's comprehensive report covers deals of all sizes in Healthcare IT across the globe.

The $2.6 billion raised so far this year has already exceeded the $2.2 billion raised in all of 2013. There were 263 investors that participated in these funding rounds, with 58 angel investors including some well-known celebrities and entrepreneurs. The quarter also included 30 corporate venture capitalists.

"It was a quarter of several milestones. It was the first billion dollar fundraising quarter for the Healthcare IT sector which has now raised almost $7 billion in venture funding since 2010. M&A deals were also at their highest this quarter, while Mobile Health companies continued to outraise other technologies," commented Mr Raj Prabhu, CEO and Co-Founder of Mercom Capital Group.

Practice-centric companies received 61 percent of all VC investments in the second quarter of 2014, with $1.1 billion in 61 deals. Areas that received the most funding under this category were Practice Management with $220 million in eight deals, Data Analytics with $204 million in nine deals, Population Health Management with $144 million in four deals.

There were 38 early-stage deals under $2 million in Q2.

The top VC funding deals over $100 million in Q2 2014 were the $135 million raise by NantHealth, a cloud-based healthcare IT company delivering care through a single integrated clinical platform, from the sovereign wealth fund, Kuwait Investment Authority and BlackBerry, the $130 million raise by Flatiron Health, a developer of a cloud-based business and clinical intelligence oncology data platform, from Google Ventures, First Round Capital and Laboratory Corporation of America, the $125 million raised by Alignment Healthcare, a provider of population health management solutions, from General Atlantic, and the $120 million raise by Proteus Digital Health, a developer of products and services integrating medicines with ingestible sensors, wearable sensors, mobile and cloud computing, from undisclosed institutional investors in the United States, Europe and Asia.
Globally, U.S. companies raised $1.6 billion from 140 of the $1.8 billion total and 161 deals. Thirteen other countries recorded at least one deal apiece.

Of the Top 5 M&A transactions, the largest was the $550 million leveraged buyout of ABILITY Network, a provider of web-based workflow solutions that aid clinical and administrative tasks for acute and post-acute healthcare providers, by Summit Partners, a growth equity investment firm. This was followed by the $532.5 million acquisition of Evolution1, a provider of payment solutions to healthcare companies, by WEX, a provider of corporate payment solutions. St Jude Medical, a medical device company, acquired privately held CardioMEMS, provider of a wireless sensing and communication technology designed to improve management of chronic cardiovascular diseases, for nearly $450 million. Other top disclosed transactions were the $225 million acquisition of ISG Holdings, which through its subsidiaries, provides medical bill review and managed care programs for the workers compensation industry, by Xerox, followed by the $150 million acquisition of Corventis, provider of a wearable technology with a focus on cardiovascular devices used for remote patient monitoring, by Medtronic, a medical-device company.

Announced debt and public market financing in Healthcare IT amounted to $1.5 billion in five deals in Q2 2014, compared to $343 million in six deals in Q1 2014.

Total corporate funding in the Healthcare IT sector, including VC, accelerator/incubator, debt, and public market financing, in Q2 2014 came in at $3.3 billion.

There were a total of 549 companies and investors mentioned in this report.