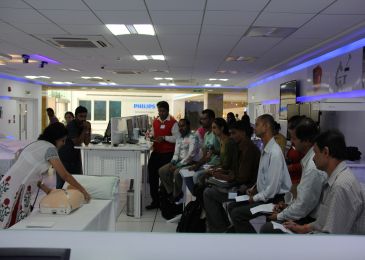 Dr Mabel Vasnaik demonstrating the use of AED to the audience

AED is a portable electronic device which provides defibrillation, that is, it applies electrical shocks which stops the irregular heartbeat, thus allowing the heart to reestablish a normal effective rhythm to a person who has suffered a cardiac arrest.

The demonstration was delivered by chief guest, Dr Mabel Vasnaik, consultant & head, Adult Emergency Department, Manipal Hospitals. She added, "Ten years ago we had older people in their 60s and 70s having cardiac arrest. Today, youth even as young as 22 or 25 years end up having this killer ailment." She attributed this scenario to peoples' poor life style including lack of exercise, obesity, high blood pressure, stress and smoking.

She further added, "People suffering from diabetes are also prone to sudden cardiac arrests as they tend to suffer from heart diseases which ultimately end up in heart attack."

Mr Srikanth Muthya, director, patient care and clinical informatics, Philips, said, "We strongly believe that the only way to deal with cardiac arrest is to build awareness and educate people by emphasizing its significance in the Indian context. We are lobbying with the government to make AEDs mandatory, which is the case in US, UK and European countries"

AED has many advantages over the traditional defibrillators. "It is light, portable and can be part of the first-aid kit, which can be easily transported anywhere," said Dr Mabel Vasnaik.

Talking about Philips' collaboration with the government about creating this awareness, Mr Srikanth added, "We have made a representation to the government about the importance of AEDs. The government has to consider having AEDs in public places and in various public automobiles. Thus, ultimately the message will be driven to the people."