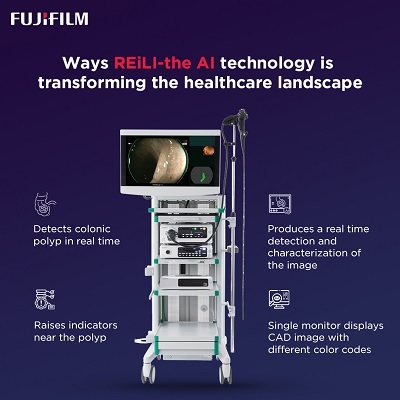 The updated function will be essential for colon polyp detection and characterisation, which will be achieved by utilising a type of Artificial Intelligence (AI) called deep learning. The launch was announced at the India Live Endoscopy Forum 2021.

The new detection and characterisation functionality of CAD EYE together with the polyp detection function will be available with software EW10-EC02 and the compatible expansion unit EX-1 in combination with Fujifilm’s ELUXEO systems and colonoscopes.

CAD EYE was originally developed to support real-time detection of colonic polyps utilising AI technology. When a suspicious polyp is detected within the endoscopic image, a Detection Box indicates the area where the suspicious polyp has been detected, accompanied by a sound signal.

The new CAD EYE Detection and Characterisation will assist clinicians by generating a suggested histological prediction by displaying whether the suspicious polyp(s) in the image are hyperplastic or neoplastic.