Robotic surgery facility in Safdarjung Hospital dedicated to the Nation 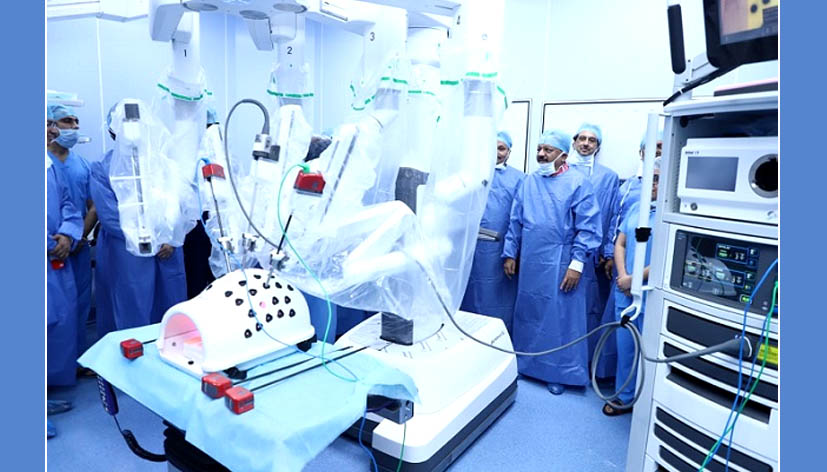 The robotic surgery facility in the Safdarjung Hospital (SJH) New Delhi was dedicated to the nation by the Union Minister of Health and Family Welfare Dr Harsh Vardhan.

Safdarjang Hospital is one of the biggest tertiary care referral centre of India, under Ministry of Health and Family Welfare catering to all poor patients of uro-oncological cancers like prostate, kidney, bladder cancers and kidney failures, from different parts of country.

It is also the first Central Government hospital in India to start this latest Robot Surgery facility for all poor patients for free. Robotic surgery has the advantage of providing minimally invasive surgery, reducing significantly the morbidity & mortality of critically ill, cancer and kidney failure patients.

The Robotic system provides 7 degrees of freedom, 3-D vision, 10 times magnification and better dissection with more precision. The operating time also decreases resulting in improvement in turnover of patients and decrease in waiting list of patients for surgery significantly.

Dr. Harsh Vardhan said that the Department of Urology and Renal Transplant of SJH has already started the First International LIVE 3-D Laparoscopic Surgeries Web Cast, showing complex uro-oncology and reconstructive surgeries, twice in a month. This has been integrated with the E-Health online education programme of Ministry of Health and Family Welfare which is now connected with 52 Medical colleges across India. This is the first such program in Urology in India. The department is going to start international LIVE webcast of robotic surgeries from the second week of November, 2019. A National Robotic training centre has also been set up for training of young doctors.