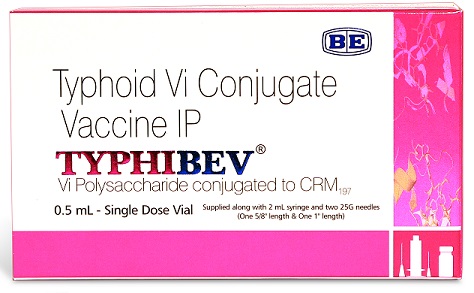 Biological E Limited (BE), a Hyderabad-based vaccines and pharmaceutical company, has announced that its Typhoid Conjugate Vaccine (TCV) has been pre-qualified by the World Health Organisation (WHO). With this pre-qualification, BE became one of two pre-qualified suppliers of TCV to the UN agencies.

BE’s TCV is a single-dose injectable vaccine, which can be administered to children from 6 months of age to adults up to the age of 45 and it is formulated with Vi polysaccharide conjugated to a carrier protein (CRM197). The Vi polysaccharide antigen used in BE’s TCV is derived from C freundii, which is a non-pathogenic source (BSL 1 organism), compared to virulent Salmonella Typhi used by other manufacturers, and the carrier protein used for conjugation is a non-toxic CRM197 protein locally developed by BE through in-house R&D effort. Clinical studies conducted in India have shown that the safety and immunogenicity profiles of this vaccine are comparable with those of the other WHO pre-qualified TCV.

The vaccine was developed in collaboration with the GSK Vaccines Institute for Global Health (GVGH), based in Siena, Italy, which first developed the vaccine strain and transferred the technology to BE in 2013. BE has further developed the vaccine, including manufacturing process optimisation and scale up, pre-clinical studies and comprehensive clinical trials for Phase I, II/III in India. Today, this vaccine is being manufactured in BE’s GMP manufacturing facilities in Hyderabad, India.

“We believe that every year this vaccine would save about 1.5 lakh people worldwide,” said Mahima Datla, Managing Director, Biological E Limited.

Francesco Berlanda-Scorza, Director, GVGH said, “For more than a decade, GVGH has been advancing vaccines for under-recognised diseases, and as a result of an innovative partnership with Biological E to develop this vaccine, and TCV pre-qualification by WHO, many more children will have access to a much needed intervention for prevention of typhoid fever.”

In March 2020, BE received approval from India's health regulators to authorise and market a new TCV (BE’s product TYPHIBEV) for infants, children and adults from 6 months.