Genomics to be blended with traditional knowledge: health minister

Genomics to be blended with traditional knowledge: health minister 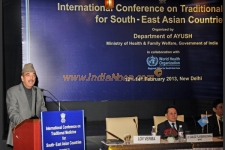 The union minister of health, Ghulam Nabi Azad while addressing the inaugural programme of 'International Conference on Traditional Medicine for South East Asian Countries' in New Delhi on February 12, 2013 sounded very excited about the outcomes of mixing traditional and modern medicine. He said, "Modern advanced technologies like genomics are also being used to study the fundamental concepts of prakriti; i.e. body constitution described in ayurveda. AYUSH drugs are being studied with advanced techniques for their activity on immune systems in disease like HIV-AIDS, for anti-cancer activity and anti-diabetic activity.

"In order to make research findings in AYUSH systems and allied faculties accessible through the web, the department of AYUSH has developed an 'AYUSH research portal' which can be accessed by everyone", he added

"India has a pluralistic healthcare delivery system where the Government provides opportunity to every recognized medical system to develop and practice with a view to provide integrated and holistic healthcare services. It is open to patronizing best practices and proven standards for the benefit of the people", said the minister.

Addressing the inaugural programme, Dr Samlee Plianbangchang, regional director general of world health organization (WHO) outlined the steps to be taken for promoting the traditional medicine in south east asia region (SEAR) countries. Dr Margaret Chan, director deneral of WHO, in her recorded message, highlighted the challenges of integrating the traditional medicine in Healthcare.

Earlier Anil Kumar, secretary, department of AYUSH narrated the huge infrastructure of AYUSH developed by Government of India in the country and initiatives taken by the department in quality of AYUSH drugs and practices.