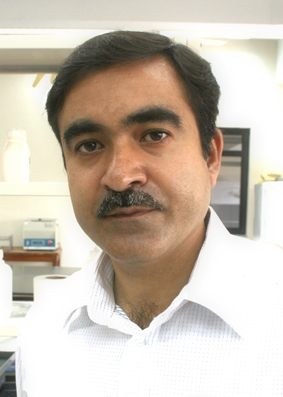 "It is like making ice creams!", mentioned Dr Ashok Kumar of IIT, Kanpur, while enthusiastically talking about the process to freeze gels in the 'use and throw' portable cryogel based bioreactors. He explains further, "Cryogels composed of either polyacrylamide (PAAm) coupled to gelatin or semi-interpenetrating PAAm-chitosan are synthesized by free-radical polymerization at - 12°C. Hybridoma cells are immobilized over the cryogel bioreactor and incubated for 48 hours. Medium is circulated thereafter at 0.2 ml min - 1 and bioreactors can be run continuously for 60 days."

This new process developed by him along with his team at Biological science and bioengineering department, for the production of therapeutics from mammalian cell culture, may work wonders for researchers in the private and public set ups. This cryogel-based disposable bioreactor matrix, which has been used for production of protein therapeutics such as urokinase and monoclonal antibodies (mAbs), may also be open for other usages as well. The research paper recently found place in prestigious Nature protocol magazine's online edition on April, 04, 2013.

The importance of such bioreactors is that they are very cost effective as compared to the ones available in the market especially for mamamlian cell culture. Dr Kumar believes that because of high cost of these products, the final drug that comes out is is also priced heavily. "Another plus point is that these bioreactors don't have any setting up issue due to comparatively small size", he told BioSpectrum over phone.

Prior to his 9 year old stint at IIT, Kanpur, where he joined in 2004, Dr Kumar completed his Ph.D jointly from IIT Roorkee, and the Institute of Genomics and Integrative Biology (IGIB), Delhi. Following that he had also continued his post doctoral research in Sweden and Japan. His research all along has been focussed on the design and development of new smart polymeric biomaterials and supermacroporous matrices for the cultivation of cells and development of integrated bioprocess for the product recovery.

Speaking further on the product, Dr Kumar says, "These bio-reactors are incomparable with the permanent reactors. This is a closed system type of reactor and media can be changed after one round. It can last upto two rounds and then can be replaced with another one. The material used in making it already FDA approved and no regulatory approval is required as long as it is use for production of therapeutic proteins at the laboratory level for the research purpose."

The cryogel-based packed-bed bioreactor can be formulated as a monolith or as beads. It also has an efficiency four times what can be obtained using a tissue-culture flask, a high surface-to-volume ratio and effective nutrient transport. The project was funded by the department of biotechnology (DBT), government of India with Rs 1 crore and now there has been renewed efforts by the Dr Kumar's team to explore uses of the bioreactor for other purposes as well.

Enthusiastic about its possible utilization by the industry, Dr Kumar says that he is very open to the idea and wants the product to reach the ultimate beneficiaries. He has been approached by few of the companies in Japan. Priced at the rate as low as Rs 1000, this high efficiency make disposable bioreactors are feasible for small-scale therapeutic development and initial clinical trials.