India to be a world leader in biotechnology 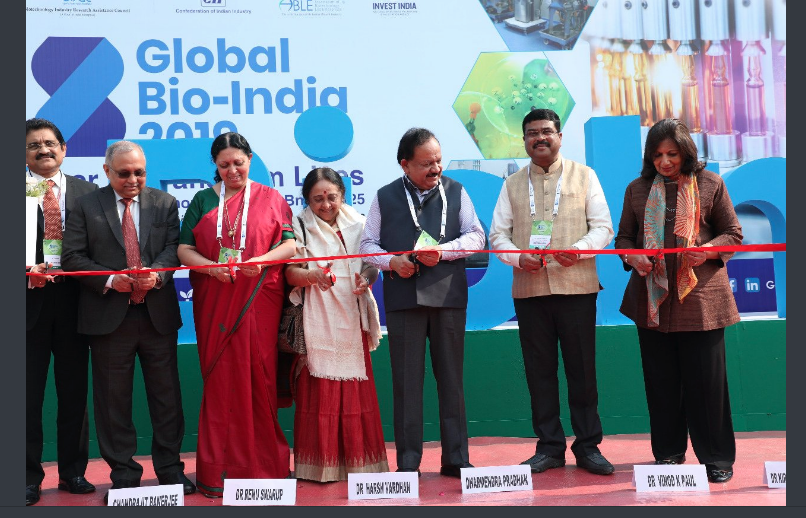 Union Minister for Science & Technology, Earth Sciences and Health & Family Welfare, Dr. Harsh Vardhan has said India has the potential to emerge as the world’s top industry destination in biotechnology sector. Addressing the Inaugural function of the 3-day Global Bio-India Summit, 2019 in New Delhi, Dr. Harsh Vardhan said India has the expertise and the biotechnology sector has witnessed exponential growth in recent decades. Government has encouraged the sector by setting up hundreds of Biotechnology Parks and Incubators while thousands of Start-ups have been supported by the Government, he added.

Dr. Harsh Vardhan said the Prime Minister has set a target of making India the top country in Science & Technology by 2030. As compared to 5% growth in scientific publications worldwide, India has notched a growth of 14% in this sphere, he said. “We have developed a number of vaccines and the rotavirus vaccine is now a part of the National Immunization programme, besides our laboratories have also produced vaccines against dengue and malaria. We are No.3 in Nanotechnology and our Tsunami Early Warning System has been ranked No.1 in the world”, he added.

Dr. Harsh Vardhan said India plays a pioneering role in the UN sponsored Mission Innovation (MI) programme and is the leading country in three MI challenges on Smart Grids, Off-Grid Access to Electricity and Sustainable Biofuels. He said we are a “Changed India” today, and as Shri Narendra Modi has aimed, we will make a “New India” by 2022 and finally we aim to be the world leader, “Vishwa Guru”.

Dr Harsh Vardhan said Biotechnology serves mankind helping in to move towards a biotechnology-led economy, transforming as many lives as possible, creating opportunities and promising development for all. He encouraged young innovators and entrepreneurs in the Biotech sector to come forward for the development of the country. “Government of India will support and assist their ideas to make it a reality. He said, as per the vision of former Prime Minister Atal Bihari Vajpayee, the wave of Information Technology 20 years ago is India Today and Biotechnology is the India tomorrow”, he said.

Pradhan said we are committed to work towards greater decarbonisation and make India a gas based economy. Bio-energy will play an important role in this, he said. “Through innovations developed by our bio-energy scientists we are now working on utilising waste biomass by converting it into Biofuels. With 600MT of biomass, which can be used as raw material, India remains the only country with highest scope for growth of Biofuels”, he added.

“In future ethanol will be produced from raw materials like, excess food grains, to help transform our 'Annadatas' to 'Urjadatas.'With 600MT of biomass, which can be used as raw material, India remains the only country with highest scope for growth of Biofuels”, said  Pradhan.

Pradhan said the Petroleum& Natural Gas Ministry has instituted a Rs 300 croreStart-Up Fund. “I have advised my colleagues to have biofuels as a key focus area and provide stimulus to the industry by giving handholding support and offtake guarantee to new & emerging entrepreneurs in the Biofuel sector”, he said.

In his address, Member, NITI Aayog, Dr. Vinod K. Paul said the Government and the private sector are working in unison to make Primary Healthcare success in the country. “The aspirations of the people of India have risen and from Primary Healthcare, we are now extending our reach to Secondary and Tertiary Healthcare”, he said.

Secretary, Department of Biotechnology, Dr. Renu Swarup said the 3-day Biotechnology Summit will discuss roadmap to achieve $100 billion bioeceonomy target. “We have scaled $51 billion already and the sector is growing at 14.7%. So the $100b target seems very modest”, she said.

Global Bio-India is one of the largest biotechnology stakeholders conglomerate being held in India for the first time. It has brought academia, innovators, researchers, start-ups, medium and large companies together on the same platform. Over 3,000 delegates from around 25 countries and over 15 states of India are participating in the mega event. More than 200 exhibitors, 275 Start-Ups and more than 100 Bio-Technology Incubators are participating in it.

Biotechnology is recognized as the sunrisesector- a key driver for contributing to India’s USD 5 Trillion economy target by 2025.