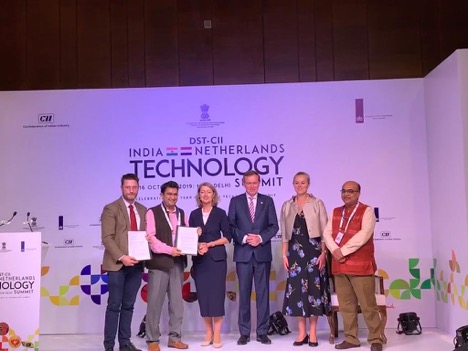 A letter of intent for a new collaboration has been signed between Centre for Cellular and Molecular Platforms (C-CAMP) and the largest AMR public private partnership organization in the Netherlands, AMR Global, with an aim to work together towards building and nurturing innovations that address the global AMR threat. This LoI was signed at the ‘One Health’ AMR session of the ongoing Indo Dutch Technology Summit in New Delhi in presence of Bruno Bruins, Dutch Minister for Medical Care and Sigrid Kaag, Dutch Minister for Foreign Trade and Development Cooperation.

C-CAMP, an initiative of Department of Biotechnology, Ministry of Science and Technology, Govt. of India, with a mandate to be an enabler of cutting-edge life science research and innovation is a globally established innovation hub for Antimicrobial Resistance solutions. It has fostered several solutions with immense potential to tackle AMR the world over while also retaining their efficacy in an Indian setting.  AMR-Global is a collaboration of public and private parties from across the Netherlands and currently spreading its wings beyond. The LoI will pave the way for deeper innovation ties between Dutch and Indian ecosystems to ensure a constant pipeline of AMR innovations, in diagnostics, prevention, drug discovery and vaccines that are globally effective and accessible. Finally, the LoI would be the first step towards facilitating adoption of ‘One Health’ in both geographies.

Compared to other countries in the European Union, antimicrobial resistance rates are particularly low in the Netherlands, primarily because of early adoption of the ‘One Health’ approach, which aims to combat AMR holistically in the healthcare system, in animals, in food and in the environment through coordinated action.

India, on the other hand is sitting on an epicenter of a possible AMR tsunami as Dr Taslimarif Saiyed, C-CAMP CEO and Director puts it. This is largely due to lack of antibiotic stewardship, indiscriminate use of antibiotics in animals and food and untreated effluent, waste and landfill. Also owing to the very nature of the AMR problem, no two countries or even regions in the world face the exact same AMR challenge. A ‘One Health’ approach could be the unifying factor in combating this menace. This LoI between C-CAMP and AMR Global recognizes the importance and vision of this game changing perspective and formalizes a joint effort towards realizing it.

Welcoming the signing of this LoI, Minister for Medical Care, Government of the Netherlands, Bruno Bruins,“AMR is growing at such an alarming rate that we need to ensure the subject stays a top priority for governments. I am excited about the Memorandum of Understanding that was signed today between the Bangalore-based CCAMP and the Dutch public-private partnership AMR-Global, which will kick start India/Dutch collaboration in this field.  Sustainable production of antibiotics and use of these life-saving drugs need to be prioritized as part of the ‘One Health’ approach and this new collaboration between CCAMP and AMR-Global will help move this forward.”