Over 1,500 delegates from more than 50 countries to attend Asia’s largest Biotechnology and Life-sciences forum 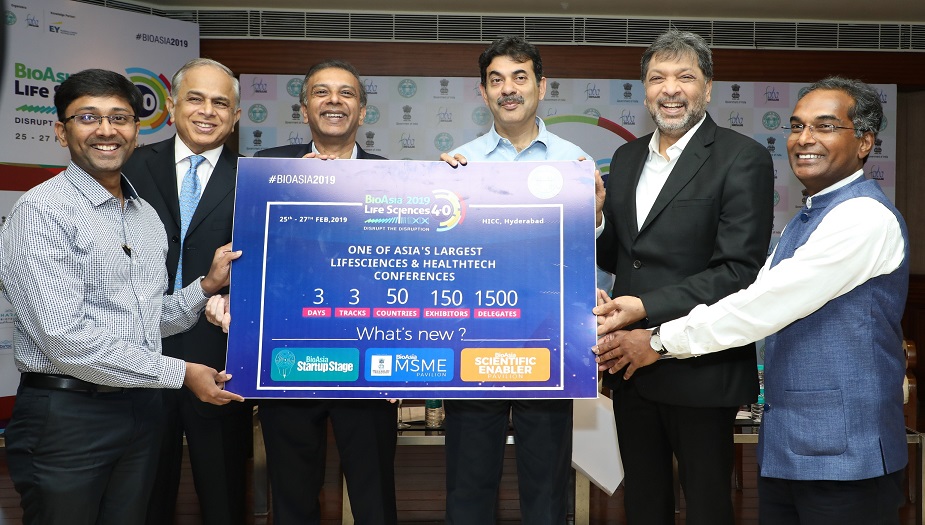 BioAsia, the annual global life sciences confluence hosted by the Government of Telangana, announced that the 16th Edition of the event, to be held at Hyderabad between February 25 - 27, 2019 - will deliberate on the disruption required in Lifesciences, Healthcare and Biotech industry. The theme for this edition is "Life Sciences 4.0 - Disrupt the Disruption", which will focus will be on healthcare being re-imagined as a result of technological disruption.

Over the past 15 years, BioAsia has helped attract investments to the tune of about Rs.15,000 crores and organized around 16,000 business partnering meetings during the event. Eminent leaders and senior government officials from around 95 countries have attended the event and close to 250 MoUs & LoIs have been exchanged at the forum. This edition of BioAsia has South Korea as the Partner Country with South Africa and Spain being the international partners for the event. These partners will lead a sizeable delegation from the related fields from their respective countries. 4 other Indian States have joined with BioAsia in organizing the next BioAsia including Karnataka, Odisha, Assam and Gujarat making it truly a National initiative.

While announcing the details, Mr. Jayesh Ranjan, Principal Secretary - Industries & Commerce & IT, Govt of Telangana said, “BioAsia today serves as an industry platform for networking and policy advocacy in addition to investment promotion. The State Government is committed to utilize this global platform to advocate the concerns of the industry and help build a conducive ecosystem for businesses to thrive. As an outcome of the deliberations at the 15th edition of BioAsia, an Innovator Cell at Central Drugs Standard Control Organization (CDCSO) has now been established by the Government of India.”