Digital is the key highlight at Bengaluru Tech Summit 2018

The three-day extravaganza is set to be bigger, better and more engaging than ever with global participants, industry captains, futurists and innovators showcasing the proud legacy of innovation in Karnataka. 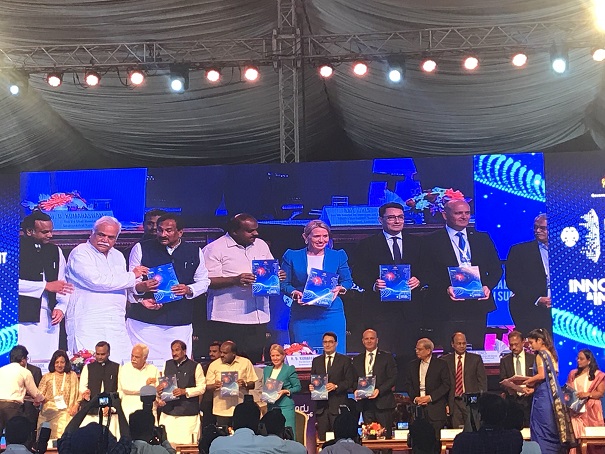 The 21st edition of Karnataka State’ flagship Information Technology and Biotechnology event, Bengaluru Tech Summit was inaugurated today, 29th Nov at the Bengaluru Palace by the Hon’ble Chief Minister of Karnataka, H D Kumaraswamy.  The three-day extravaganza is set to be bigger, better and more engaging than ever with global participants, industry captains, futurists and innovators showcasing the proud legacy of innovation in Karnataka.

The event is being organized by the Department of Information Technology and Biotechnology, Government of Karnataka, in association with Software Technology Parks of India (STPI) Bengaluru, with the support of reputed national industry associations like NASSCOM, IESA, TIE, ABAI etc.

Keeping in view the focal theme this year, ‘Innovation and Impact’, particularly the convergence of technologies, such as Artificial Intelligence, IoT, Blockchain etc. that helps in providing solutions for the challenges faced in health, education, agriculture, energy etc., sectors. While the big players have an advantage, it is the SMEs and Startups that need encouragement.

Speaking at the inauguration, H D Kumaraswamy, expressed his delight to be present at the inaugural function of Bengaluru Tech Summit 2018. “Karnataka has been consistently ranked high when it comes to foreign direct investment and employability. The IT, BT and related sectors have provided direct employment to over a million people and indirect employment to 3 million people in Bengaluru alone. The number of engineering and R&D centres of Multi-National Companies in India has increased from 943 in 2016 to 976 in 2017 as per a study conducted by the consulting firm, Zinnov. 65% of the MNCs who have their global in-house centres are from the USA. 37% of the GIC centres of MNCs are in Bengaluru. This goes to prove that technology engagement in the State is the bedrock of the strong foundation for investments. Karnataka is indeed the first choice for technology investments, worldwide,”  he said.

S Gopalakrishnan, Chairman, Vision Group on IT highlighted the fact that Bengaluru is being termed as the innovation capital of India. While talking about the entrepreneurship culture that has gradually developed in Karnataka, he congratulated Biocon on completing 40 years.

"This year we are proudly celebrating 40 years of the Indian biotech sector. We no longer refer to it as the biotech sector, we are now calling it the bioeconomy. This is the digital era where the bioeconomy is being valued at $53 billion. 50 per cent of this value is being contributed by the biopharma sector. The best part is that the Med Tech sector has gained a share of about $12 billion. These achievements have largely been possible due to a symbiotic relationship between academia, government and industry in Karnataka", said Kiran Mazumdar Shaw, CMD, Biocon.

Adding on with the international perspective, Kate Jones, Minister for Innovation & Tourism Industry Development, Queensland Parliament, Australia said, "We have a long history of innovation and we are proud of the fact that our country is leading in the sector of medical technology. We are also investing heavily in robotics and computer 3D modeling". She also announed that the Queensland Government’s first official Queensland-India Trade and Investment Strategy has been launched that is set to deliver a $1.5 billion trade boost to the state’s economy.

The inaugural event also saw the unveiling of the ‘Innovate Bengaluru’, an Augmented Reality embedded book. This innovative media tech product published by Raintree media and Global Village Publishing, is all about Bengaluru’s innovators and innovative ecosystem.

The coming 2 days of the event has the support of leading IT and Electronics Associations, such as NASSCOM, IESA, TiE, ABAI, Data Security Council of India (DSCI) etc. The conference focus would be on Blockchain, AI, ML & Robotics, Intelligent Apps and Analytics, Immersive Experience (AR/VR), IOT, Telecom, Cyber Security, BioPharma, BioAgri, BioEnergy & BioFuels, BioServices, BioInformatics, Investment & Finance and much more.