It limits the spread of infectious diseases like COVID-19 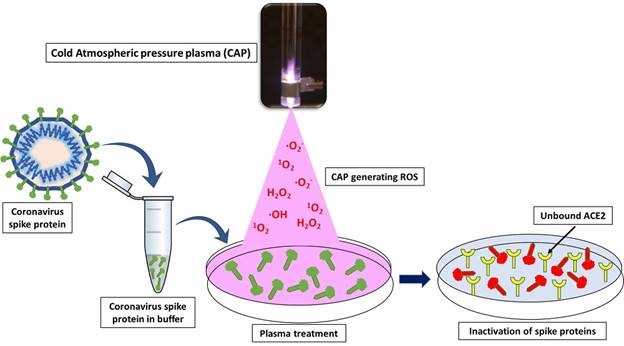 The team has demonstrated that the plasma generated has the potential to deactivate SARS-CoV-2 spike protein, which binds to human ACE2 receptor for inducing viral infection and subsequent COVID-19.

The scientists passed plasma forming gases such as helium, argon and air through a high voltage electric field which led to the formation of a stable plasma with a mixture of ions, and electrons emitting a pink glow of CAP inside the reaction chamber.

This research recently published in the international journal of the RSC (Royal Society of Chemistry) Advances shows that short-lived highly reactive oxygen and nitrogen species (ROS/RNS) generated in the plasma led to complete deactivation of the SARS-CoV-2 Spike protein occurs within 2 min of CAP treatment. The RT-PCR analysis has also established that CAP can deactivate the RNA of the SARS-CoV-2 virus.

The researchers showed that the CAP, a plasma-based disinfection method is a better alternative to environmentally hazardous chemical-based decontamination methods. The cold atmospheric plasma is environmentally safe since, during the entire decontamination process by plasma treatment, no chemical waste is produced. The research was conducted at the COVID-19 testing and research facility of IASST which according to Director Prof Ashis K Mukherjee has carried out more than 1.54 lakhs tests to date.