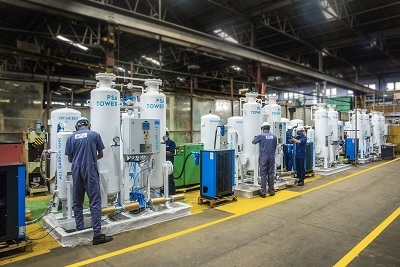 Godrej & Boyce, the flagship company of the Godrej Group, has announced that one of its businesses, Godrej Precision Engineering has received an order from the Defence Bio-engineering and Electromechanical Laboratory, (DEBEL), a Defence Research and Development Organisation (DRDO) laboratory in Bengaluru to manufacture oxygen generators to support India’s oxygen buffer plan.

DRDO has transferred the technology from the existing technology partner to 10 private sector companies including Godrej & Boyce.

The first batch has been manufactured and supplied to rural hospitals across Uttar Pradesh, Uttarakhand and Madhya Pradesh within a record period of one month.

The system utilises an air compressor to provide compressed air to the oxygen plant which is filtered and dried by a refrigerant air dryer and further filtered before the air is admitted to the oxygen generator through adsorption towers.

The oxygen generator removes the nitrogen from the air by absorbing it in the molecular sieves and produces an output with 93±3 per cent oxygen. For separating oxygen from the air, the medical oxygen generator employs the Pressure Swing Adsorption (PSA) technique. The output is stored in a storage tank. Each generator can produce 250 litres of oxygen per minute which can cater to 50 patients.