The program aims to raise awareness and reduce the stigma of TB among young people in India, as part of Johnson & Johnson's 10-year initiative to combat world's leading infectious disease killer 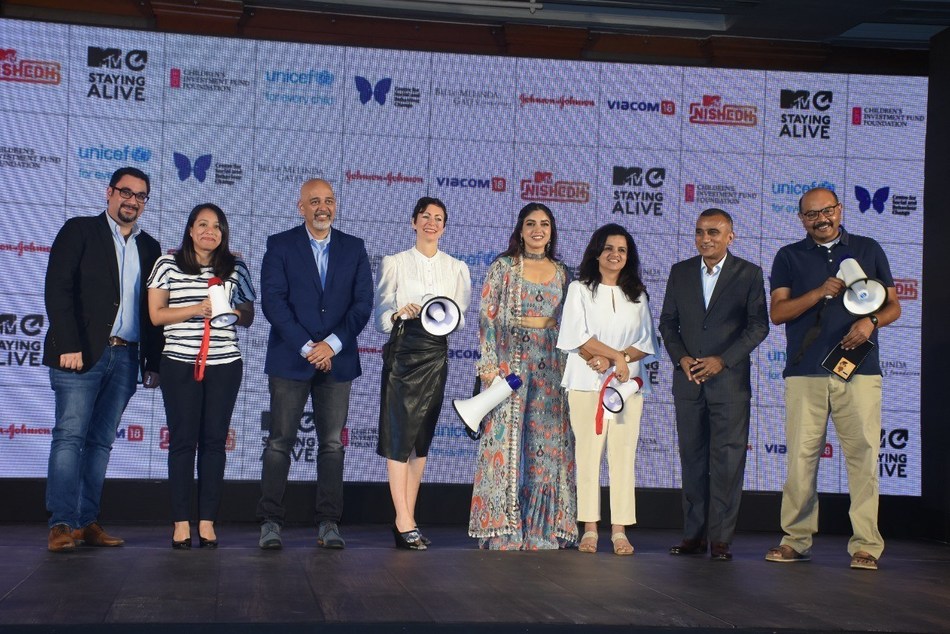 Johnson & Johnson Services Inc. is proud to announce its collaboration with the internationally acclaimed social change organization the MTV Staying Alive Foundation on a youth-focused 'Edutainment' campaign in India, MTV Nishedh, which aims to raise awareness and reduce stigma around critical health and social issues facing young people. Through an educational grant, Johnson & Johnson is supporting the inclusion of tuberculosis (TB) messaging for the very first time in an MTV Staying Alive campaign, as part of the Company's 10-year initiative to fight TB and in support of the Government of India's goal of ending TB by 2025.

One of the seminal components of the MTV Nishedh campaign - a 7-week, 13-part TV drama series, which will air from January 25, 2020, at 8 pm IST on MTV India - was officially announced at an event in Mumbai. Among other storylines, the drama follows the struggles and triumphs of two characters with TB to help inform young people about the signs and symptoms of the disease, encourage those who might be affected to seek care and debunk common myths to help reduce the social stigma often faced by patients.

"It's time to make more people aware of TB, remove the stigma associated with the disease, and help those in need of treatment access the best possible care," said Sarthak Ranade, Managing Director, Janssen India, Johnson & Johnson Private Limited. "At Johnson & Johnson, we have been working closely with the Government of India, NGOs and other local partners to combat TB and DR-TB at all levels by building capacity and expanding access to treatment. Building on this commitment, our Company is incredibly proud to support the MTV Nishedh campaign to empower youth and advocate for a TB-free India."

Despite being a preventable and treatable disease, TB kills one person every minute in India, and the vast majority of TB cases are reported among young people in their most productive years. Of the 10 million estimated cases of TB in 2018, only 7 million were diagnosed, meaning there are 3 million 'missing' patients who are not aware that they are infected - approximately 700,000 of which live in India. Further, the emergence of drug-resistant TB (DR-TB) has made addressing the disease even more challenging, and TB is now the leading cause of deaths due to antimicrobial resistance (AMR) globally. Stigma and lack of awareness are often key reasons why those affected are not diagnosed and treated.

By engaging young people - which comprise two-thirds of the population in India - MTV Nishedh is setting out to address this. The campaign builds on the success of MTV Staying Alive Foundation's multi-award-winning campaign with proven impact, 'MTV Shuga', which has helped to generate positive behaviour change around HIV and sexual and reproductive health across Africa.

In addition to the TV drama, the J&J-supported campaign also includes a 15-part MTV Nishedh Live radio program, which has been airing on RED FM since October, as well as compelling and informative online content. A peer-to-peer education program, which will also feature TB modules, will be launching soon.

"We are thrilled to be working with Johnson & Johnson to include TB in our campaign programming for the first time - particularly in India, a country so hard hit by this devastating disease," said Georgia Arnold, Executive Director of the MTV Staying Alive Foundation and Executive Producer of MTV Nishedh. "We hope that the MTV Nishedh campaign will play a key role in helping to improve diagnosis rates in the country by informing young people about TB, breaking down the stigma around the disease and, ultimately, encouraging youth to treat those impacted by TB with the respect, courtesy and dignity that they deserve."

For our part, Johnson & Johnson TB experts provided critical input to the MTV team on the technical aspects of TB disease and enabled TB survivors to inform the campaign to ensure the experiences and emotions faced by patients are realistically portrayed.

"Johnson & Johnson is incredibly proud to be working with the MTV Staying Alive Foundation on this important campaign - which we hope will engage more young people in the fight against TB and help bring conversations about this disease out of the shadows," said Cat Oyler, Vice President, Tuberculosis, Global Public Health, Johnson & Johnson. "This collaboration is one of a series of new partnerships that Johnson & Johnson will be undertaking to help reach the 'missing millions' of TB and DR-TB patients in India and around the world, as part of our global 10-year initiative to help create a world without TB."