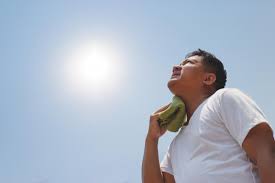 Heat illnesses occur due to the body's inability to cope with heat. Heat stroke results from prolonged exposure to high temperatures usually in combination with dehydration which leads to failure of the body's temperature control system. With the influence of global warming, it is predicted that the incidence of heat stroke cases and fatalities will also become more prevalent.

The medical definition of heat stroke is a core body temperature greater than 104 degrees Fahrenheit, with complications involving the central nervous system that occur after exposure to high temperatures. Heat stroke and deaths from excessive heat exposure are more common during summers with prolonged heat waves.

The most common symptoms include nausea, muscle cramps seizures, confusion, disorientation, and sometimes loss of consciousness or coma. Morbidity and mortality from heat stroke are related to the duration of the temperature elevation. When therapy is delayed, the mortality rate may be as high as 80%; however, with early diagnosis and immediate cooling, the mortality rate can be reduced to 10%. Mortality is highest among the elderly population, patients with pre-existing disease.

Heat stroke is a medical emergency and continues to be one of the leading causes of preventable deaths. Rapid reduction of the core body temperature is the cornerstone of treatment because the duration of hyperthermia is the primary determinant of outcome.

Behavioural responses are important in the management of temperature elevations and may provide clues to preventing the development of heat stroke. Education is the single most important tool for the prevention of heat stroke. The media, public education, public health programs, and athlete safety programs can play a pivotal role in increasing the public's awareness of the dangers of heat during heat waves. Similarly, drinking fluids on schedule (and not based only on thirst), frequent cooling breaks may drastically reduce the incidence of heat stroke. Recognition of host risk factors and modification of behaviour (eg, limiting alcohol and drug intake and the use of medications and drugs that interfere with heat dissipation) and physical activity also will prevent heat stroke.