Surgery has become more precise and less invasive resulting in quicker healing and shorter hospital stays for the patient. 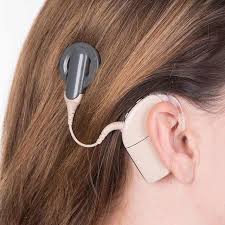 A cochlear implant is an electronic device that takes over the work of the human ear in converting sounds to electrical signals that the brain understands as sounds and delivers them to the brain via the hearing nerve, after fine tuning the sound much like the graphic equaliser on a music system, via an electrode array surgically implanted into the inner ear.

People who have severe to profound hearing loss wherein even wearing hearing aids the person will have difficulty in understanding normal speech even at very loud volumes, and without the hearing aids would not even detect the loudest shout .

How does one detect severe to profound hearing loss in a child or adult?

The subject will not hear important elements of the class discussion including key context and content without visual cues, will have a smaller or more limited vocabulary than their same age peers,not hear all the sounds in a word, commonly leaving off 's', 'ing' and 'ed' in their speech and their writing , will have problems pronouncing some speech sounds, particularly those in the high frequency such as ‘s’ or ‘p’. They will also become very tired towards the end of sessions that have required intense concentration or were conducted in noisy environments.

Very often , they misinterpret what is said although they 'hear' the speaker’s voice (they know that someone said something but couldn’t hear clearly enough to understand what was said)

There is a limited understanding of colloquial language, such as 'pull up your socks', and in normal conversations , they have difficulty understanding complex sentences, have poor vocal quality, have trouble explaining their ideas to other people, and have limited background knowledge and experiences in a range of areas which can affect learning and social skills.

The right candidate for a cochlear implant-

A person who has severe to profound hearing loss in Both ears, has a functioning hearing nerve which is detected by medical tests, has lived at least a short while without hearing, has no medical reasons to avoid surgery, has no benefit from the best hearing aids , and has a good support group at home .

Components of a cochear implant-

A cochlear implant consists of an external device that looks like a hearing aid , which has the function of capturing sound, tuning the sound like the graphic equaliser on a music system, using software, and then transmitting the sound like a radio station to the surgically implanted device.

The surgically implanted part consists of an antenna like a radio antenna which picks up the sound from the external device , a processor which like a music system output , takes the sound and sends it to different parts of the electrode which is implanted In the inner ear , much like a surround sound music system delivers sounds to different speakers in a room .

The electrode array , which is like Diwali lights , where depending on the processor different lights at different points on the cable switch off and on , in this case different electrodes switching off and on cause different parts of the hearing nerve ends to receive stimulation that the brain perceives as sound of different frequencies.

Evolution of cochlear implants since 1987-

External device has become smaller, more lightweight, more microphones to pick up sound and better software with faster processors to process more sound and give clearer and more focussed sound to the patient. Also it has become smarter, able to send and receive data from the implanted device to diagnose problems and improve efficiency of sound transmission to the brain.

Implanted device has become smaller, more lightweight, electronically smarter, wherein the implanted device can send diagnostic information back to the external device . Also it occupies less space and requires less surgical exposure. The electrode array has more electrodes and is slimmer and less damaging to the inner ear structures resulting in more information delivered to the hearing nerve while preserving residual hearing, which has resulted in better speech and sound understanding even in noisy environments. Also the materials used have advanced to a stage where the body rarely rejects  the implant.

Surgery has become more precise and less invasive resulting in quicker healing and shorter hospital stays for the patient.

Sound processing software has advanced and is still advancing , enabling doctors after surgery to fine tune the patients hearing and create software environments wherein even in noisy environments speech and sound understanding is getting even better all the time .This has resulted in less and less speech and sound training required after surgery and more natural sounding hearing.

Cost factor- Both surgery and implantation costs are decreasing all the time as devices are being mass produced and surgical techniques less invasive requiring shorter surgical times and less hospital stay.